◂ ◂ I will vote for a real climate leader ▸▸

350 Ghana Reducing Our Carbon (G-ROC) and the local communities are calling on our leaders to walk the talk and to no longer postpone our survival – and be more ambitious by ensuring an increase in the renewable energy contribution in the national energy supply mix to 30% by 2030.

We need your support to ensure we keep the pressure on these elected leaders; ensuring that the climate agenda remains top of their minds. Stay tuned! The video will play when the webinar starts.

With the impending presidential elections scheduled to take place in December 2020, there is a need to ensure that all the candidates and elected leaders have well-laid out climate ambitions. Here’s how the first two runners did in our climate-protector test:

Would you please tweet the messages below to ask these two presidential candidates about their plans to confront climate change and transition Ghana to at least 30% renewable energy by 2030.

President Akufo Addo @NAkufoAddo Ghanaians need you to commit to the promise of a Ghana powered by 30% Renewable Energy by 2030 #RE4C #AVCaravan https://bit.ly/3i3B3kH

.@JDMahama Ghanaians need you to commit to the promise of a Ghana powered by 30% Renewable Energy by 2030 #RE4C #AVCaravan https://bit.ly/3i3B3kH

Ghana’s and Africa’s potential for renewable energy is immense, let us usher in a Ghana run on 100% #renewableenergy for this is possible #RE4C #AVCaravan https://bit.ly/3i3B3kH

.@350GROC is paving the way by creating awareness about the renewable energy potential Ghana has, Honorable President Akufo Addo @NAkufoAddo we need your support to make this a reality #RE4C #AVCaravan #AfrikaVuka https://bit.ly/3i3B3kH

This election year Ghanaian citizens will choose the leader who will guide them to a future where Ghana is run by 100% renewable energy @NAkufoAddo @JDMahama, are you that leader? #RE4C #AVCaravan #AfrikaVuka https://bit.ly/3i3B3kH

In the words of the great Kwame Nkrumah “We face neither East or West; We face forward” and this election year Ghana needs a leader that guides Ghana to the future of a country run on 100% renewable energy #RE4C #AVCaravan #AfrikaVuka https://bit.ly/3i3B3kH

GROC made the decision to fight the Ekumfi proposed coal plant because the project was inconsistent with Ghana’s commitment to the Paris Climate Agreement. Again, the project would have lots of adverse social, health, and environmental impacts on the immediate community where the plant is to be sited and the nation as a whole.

We took the time to do a content analysis of the scoping report where we raised issues of concern and inconsistencies and challenged the government as a whole to respond. We made very strong and categorical statements against any availability of clean coal-based on research or our findings. The onus was on the government to provide that evidence which it failed to do.

We undertook the following: printing and distributing campaign booklets, contacting local and international organisations, forging good rapport with youth leaders in the locality, preparing articles for local newspapers, embarking on digital campaigns, and granting media interviews. Our working relationship with local and international organisations as well as media engagements were the most effective.

Following our big win against coal, G-ROC, and partners proceeded to push even harder for alternative sources of energy and launched the Renewable Energy for Communities campaign (RE4C) in 2017. This campaign is aimed at prioritizing clean solutions to Ghana’s energy challenges, creating awareness, and increasing access to and use of renewable energy.

G-ROC has continued to champion for a 100% renewable energy run Ghana alongside partners. We do know that this is a long-term goal. So for now, we are building on President Nana Akufo-Addo’s commitment of ensuring that Ghana is powered by 10% Renewable Energy by 2030 by calling on our leaders to be more ambitious by ensuring an increase in the renewable energy contribution in the national energy supply mix to 30% by 2030.

2020 is an election year in Ghana and we are championing for a consistent green agenda from all the presidential candidates. So you can help us by sending messages via Twitter and Facebook to these candidates so as to ensure that combating climate change is part of their development agenda.

From May - August, we'll be putting a spotlight on the fights happening across Africa to stop climate change and fossil fuel development. From Senegal to South Africa (with many stops in between), join us live online every two weeks as we connect with frontline groups exposing the fossil fuel and finance industry's role in accelerating the climate crisis, and find out how you can take action to support their work.

Or copy and paste the text below into an email message.

Thank you for RSVPing to join the AfrikaVuka Caravan. We'll contact you soon with more exciting updates!

Will you share this to get more people involved? 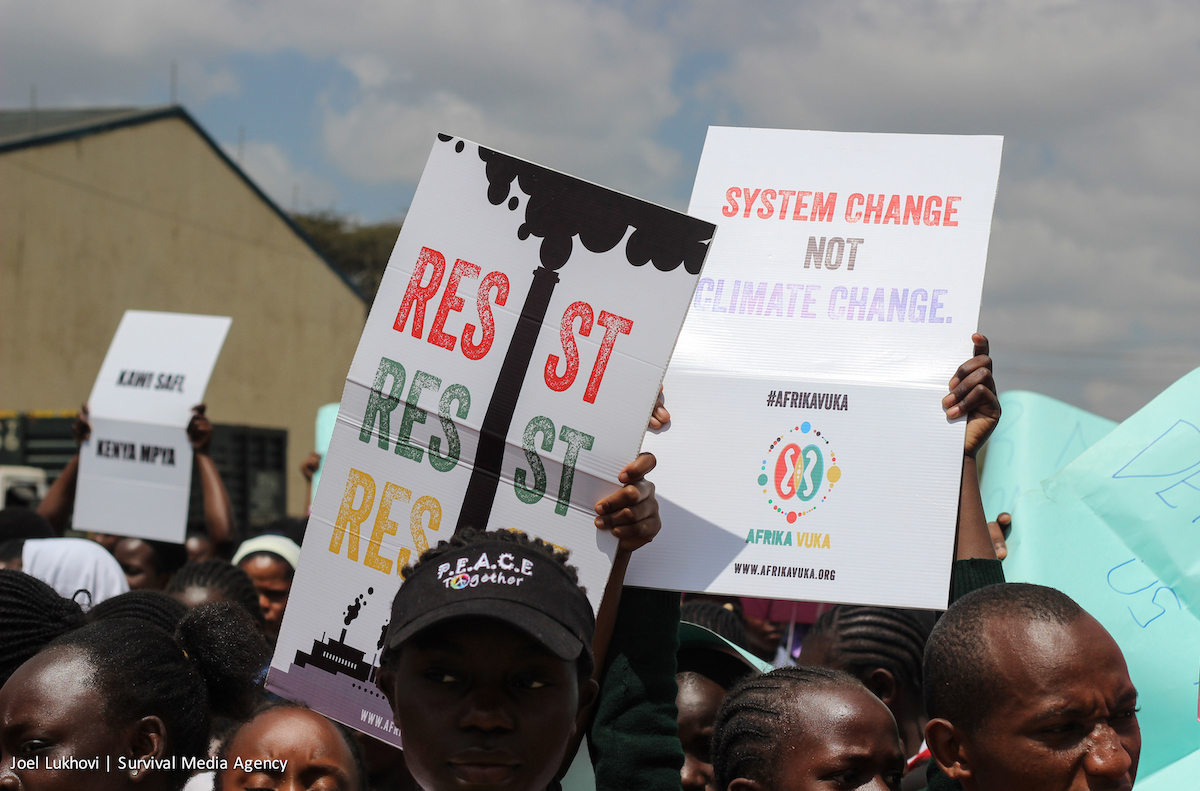 From Senegal to South Africa (with many stops in between), join us live online every two weeks as we connect with frontline groups exposing the fossil fuel and finance industry's role in accelerating the climate crisis, and find out how you can take action to support their work.

Can you chip in to help stop climate change and create a more just, prosperous world? Donate in two minutes now:

Don’t forget to leave your information and we’ll send you reminders for future #AVCaravan webinars.

Thank You for Signing Up!

Click here to go to the #AfrikaVuka Caravan homepage.