On the 21st July 2018 we hosted the inaugural Art for Climate Get together, this event was about using art as a medium to spread the message about Climate Change. We enlisted some of the country’s top entertainers and influencers to be part of the event and spread the word about it beforehand.

On the day we started with some Climate Change conversations from our campaigner (Ahmed) who explained to the attendees our current campaigns 350 Africa – #ThumaMina: Heed the call, say no to coal, DBSA and some of the other campaigns we have worked on before heading out for a graffiti workshop headlined by Graffiti South Africa’s Cale Waddacor. This session took 2 hours with Cale taking the 40+ participants through the journey of using graffiti as an activist tool while our influencers and musicians took to the stage and performed for the masses.

We were also treated to the artistry of Stewart as he painted an example of the Rise for Climate image, which gave us an opportunity to introduce the Rise for Climate Art competition to the participants in the hopes of any of them entering and probably coming up with our regional image for Rise. The Art competition runs from the 21st July till the 10th August, link below. 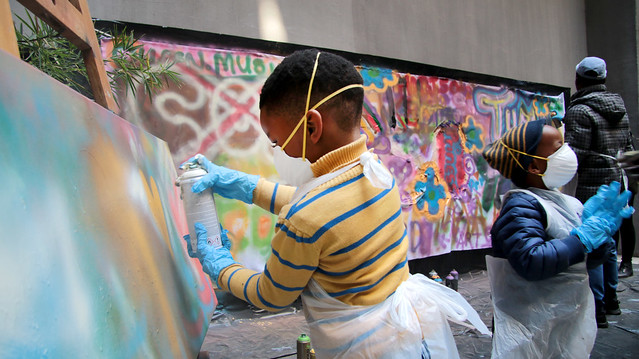 The idea behind hosting such an event/activity was to reach out to new audiences in South Africa, this has been a very difficult task for our team as most of the activities/events we have had in the past have yielded small turnouts. The art and climate get together proved very rewarding and we are looking forward to doing more of these sorts of events. We are now in the process of the absorption plan for the 40+ participants as we find ways of keeping them engaged and becoming permanent parts of the climate movement.

Want to get creative? Pick up a paintbrush, sponge or stencil and join our art competition. Submit your masterpiece here: Rise for Climate Art Competition